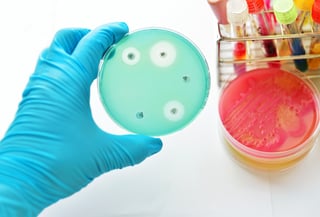 Antibiotic resistance poses one of the biggest threats to public health in modern times. Currently, an estimated 50,000 deaths across Europe and the US ever year are thought to be caused by antibiotic resistance. If left unchecked, experts believe that resistance to antimicrobial drugs could result in as many as 10 million deaths per year globally by 2050, and cost 100 trillion US dollars annually just to manage the effects.

Antibacterial drug resistance has been observed since the first antibiotics were discovered almost a century ago. However, their overuse – and misuse – in recent times has accelerated this natural process. Factors such as, the inappropriate use of antibiotics to treat non-bacterial infections, their increased use in agriculture, and poor patient adherence to treatment regimens, have created the perfect environment for resistance to emerge.

The US Center for Disease Control and Prevention now estimates that over 70 percent of bacterial infections are caused by bacteria that are resistant to at least one antibiotic on the market. Even last line of defense antibiotics such as colistin are now ineffective against some strains.

Despite the scale of the challenge, there exists a worryingly large gap between the demand for new antibiotics and their supply. One reason for this shortfall is the current economic model for the development and sale of antibiotic products, which many stakeholders now believe is unfit for purpose. Fundamentally, the need to restrict the use of novel antibiotics inherently limits sales potential, discouraging investment in their development.

Consequently, the number of pharmaceutical companies funding basic research into antibiotics has fallen substantially over the past two decades, with many turning their expertise and resources to more profitable ventures. The number of antibiotics in the pipeline is now at worryingly low levels, with just five new classes of antibiotics entering the market between 2000 and 2013.

To kick start antibacterial R&D, key stakeholders recognize the need to develop a new framework that rewards innovation in antibacterial discovery, but de-links profits from sales. While a number of “push” and “pull” factors could play a role in incentivizing investment, many agree that to work effectively and ensure global access to new medicines, international co-ordination will be required.

While changes to the current economic model for antibiotic development will be necessary to boost the supply of new and effective drugs, it’s also essential to reduce their demand through better stewardship.

Poor adherence to antibiotic treatment regimens is a key factor in the rise of resistance, with patients often unaware of the consequences of finishing treatment courses early. The relative ease in which antibiotics are available over-the-counter in some regions and incorrect patient self-diagnosis are also significant contributors to the unnecessary use of these precious resources.

Of course, a reduction in antibacterial demand could be achieved through the prevention of infection in the first place. Simple measures such as handwashing can be particularly effective at reducing the spread of infections in hospital settings, while in the developing world, greater access to clean water and sanitation will play an essential role.

Better disease diagnosis will reduce antibacterial use, with clinicians in the past arguably too quick to prescribe antibiotics when the underlying cause of the disease was unclear. More affordable, rapid and reliable diagnostic technologies will be essential to ensure that infections are being treated using the right type of antibiotics, and only when appropriate.

Antimicrobial resistance is truly a global challenge that will require action from all major stakeholders – from the pharmaceutical industry and healthcare sector to governments and the general public. To find out more about how we can all play a role in tackling this challenge, read our article in full.